A supersonic car designed to smash the land speed record by reaching 1,000mph will be tested in public for the first time today.

Wing Commander Andy Green is aiming to reach the unprecedented 1,000mph mark – breaking his current world land speed record of 763mph in the process – in his supersonic car, the Bloodhound SSC.

The public will get to see the Bloodhound driven by Green at speeds up to 200mph for its first outing on the runway at Cornwall Airport in Newquay, as part of a series of tests before an attempt is made on the record itself. 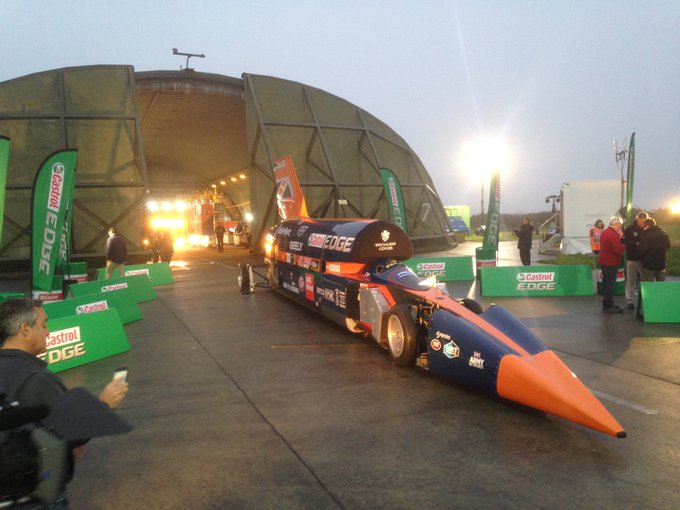 The 13.4-metre car weighs 7.5-tonnes and is powered by a jet engine and a rocket capable of producing more than 135,000 horsepower – more than six times the combined power of all of the Formula 1 cars on the grid during a typical Grand Prix.

With more than 3,500 parts, the Bloodhound is one of the most technologically complex cars ever manufactured.

The mastermind behind it is 85-year-old Ron Ayers, who has come out of retirement in an attempt to break his own record.

Mr Ayers designed behind the Thrust super-sonic car project in 1997, which set the record with a speed of 763.035mph, he has returned determined to reach 1,000 mph.

If successful, his team will have built the world’s most advanced straight-line racing car and achieved the fastest speed recorded on land.

Mr Ayers, the project’s chief of aerodynamics, has been an engineer since January 1950, and worked on the first prototype of the Victor bomber.

He did not need much persuading to roll his sleeves up again, saying, “I’ve retired five times already but it doesn’t seem to make me any less busy.

“When you enjoy challenges, when another one comes along you accept it. I don’t need talking into it if there’s an opportunity and a challenge to meet”.

For the Thrust SSC the team used two jet engines but this time they have opted for one jet engine, the ES200 Euro Fighter, the best jet engine in the world, and a specially designed rocket motor.

Speaking ahead of the test Mr Ayers, who was made MBE for his services to engineering in 2014, said the car was in “good condition”.

Attempting to beat the team to its record are the Australian Aussie Invader 5R team and American team North American Eagle, but Ayers is confident the Bloodhound is the most likely to make history, because “we’ve done it twice before”.

“We rather suspect we’re ahead of them…so we might also push the record outside their reach,” he said.

The rocket engineer explained that the 1,000 mph target came about after he calculated that it was the ” physical limit you can reach on land” before “science becomes a barrier”.

Mr Ayer’s interest in planes began as a child during the Blitz, when he would watch Spitfires and Hurricanes flying in the sky.

He hopes the ambitions of the Bloodhound SSC will enthuse the next generation into a career in engineering.

“It’s 61 per cent faster than any other team in the world has ever done,” he said.

“You can’t do that without breaking into new technology and we firmly believe that the technology we’re creating is of value to the country.

“We’re not doing it just for the sake of the record, we don’t think anyone else shows signs of beating it.

“We are doing it for educational reasons because children love studying fast cars and it keeps them interested in engineering and stem [science, technology, maths and engineering] courses”.

The team hope to be able to carry out their record attempt with the Bloodhound at Hakskeen Pan in South Africa in the next year or two.

What Is a Bitcoin Faucet?

Blood test that determines the risk of a heart attack

Paiva Road: the wonderful harmony of nature and design

Where Does My Credit Score Need To Be To Refinance?